Well March was my best ever month on eBay. Basically I worked my little socks off and loaded everything onto there that I could.

Peacock Jardiniere £100 bought for £57 so not a huge margin and I had it sitting in stock, garage, fairs etc so was glad to see back of it! Terrified of breaking it and the lovely customer came to collect. 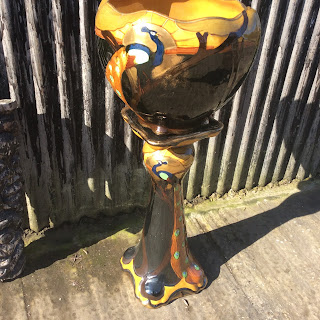 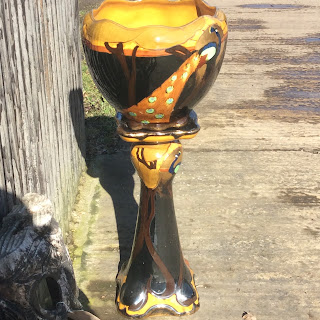 Derby winners Silk Scarf went to the USA, these are quite rare and I was really lucky to find this in a mixed 2 boxes of items. I paid £32 & £6.50 commission. Sold a lot of other scarves and tea towels for £65. So I had this scarf for sale for £5 at the antique centre, lucky it did not sell so decided to research it and found oh boy yup worth money! So listed at £95 and it sold, I charged postage too as it had to be insured. So a great profit from an item I had no idea was worth any money. Rest of the lot failed to sell so back into auction bought in a further £10 after commission. Then see next item below. 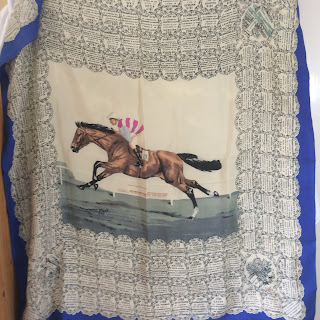 Also in the scarves lot above, was a transistor radio, unopened and unused. Now just think about that, in the 1960's we all used out Transistors to death as Mum & Dad never let us near their radio equipment! So to have an unused one pristine in box is a rare thing. Plus it had all the receipts and had been bought by an employee of the manufacturing company so great history. So we see from above I am already in serious profit on this lot but I put it on at £100 - nothing doing. Reduced it to £75 and bingo got an offer, had to fight a bit to get it raised but sold for £60. 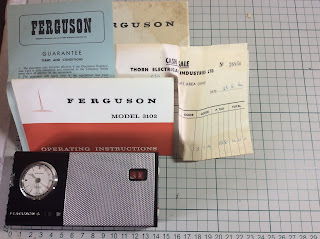 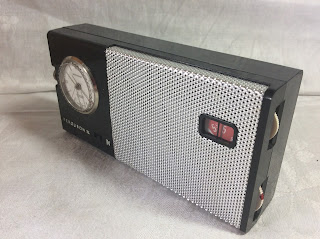 Bumper fishing bundle, lots of feathers, tying equipment, spools etc all for Fly Fishing. Now once upon a time I worked in a pet shop that also sold fishing gear, not fly fishing stuff. But I did have an idea this might make a bit of money. So went ahead and bought it for £48 including commission whoopee sold for £123. 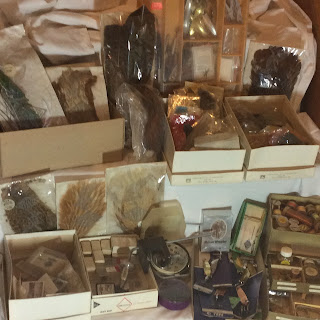 Of course on all this lot of £'s I have to pay ebay commissions which work out at 10-14% of total sales and they take another 10 % of your postal charges. Plus Paypal take a chunk too. So I allow 20% for commission to online blood suckers. Still made a good bit from these items.

Had some fails as well, there always are you just have to accept that not everything will sell. Sometimes its seasonal, wrong pricing, condition issues = fussy buyers or you have just plain bought a load of rubbish. You just have to suck that up and stick it in a box either for another auction or off to the boot fair. Real dead wood goes to the tip.

Or like me you make a mess up of postage and send items to the wrong people. But that's for another post.

I always give my items a try at the antique centre, at a fair and on ebay that way you get to all types of buyers. Yes there are still people who don't buy off the internet. I also often have a 1/2 price sale at least twice a year at the antique centre. This allows other dealers to get some bargains and try them at other centres.

It was  a huge amount of work after the euphoria of sales, many tea sets and dinner services, darn they take a lot of packing.  Anyway this month April I am back to earth, boot season has started and people are off there spending.

Well that's me off for some supper see you next time.

Your comments are all read and appreciated. Hope you will forgive me if I miss commenting on your comment, I will be busy doing art :-) x Joan

Promote Your Page Too

MadBirdDesignsUK
Colchester, Essex, United Kingdom
Art makes me dream, it's my reason for being. If I can knit, stitch, paint, stick, cut an item it's in my art. Love teaching and sharing my designs.